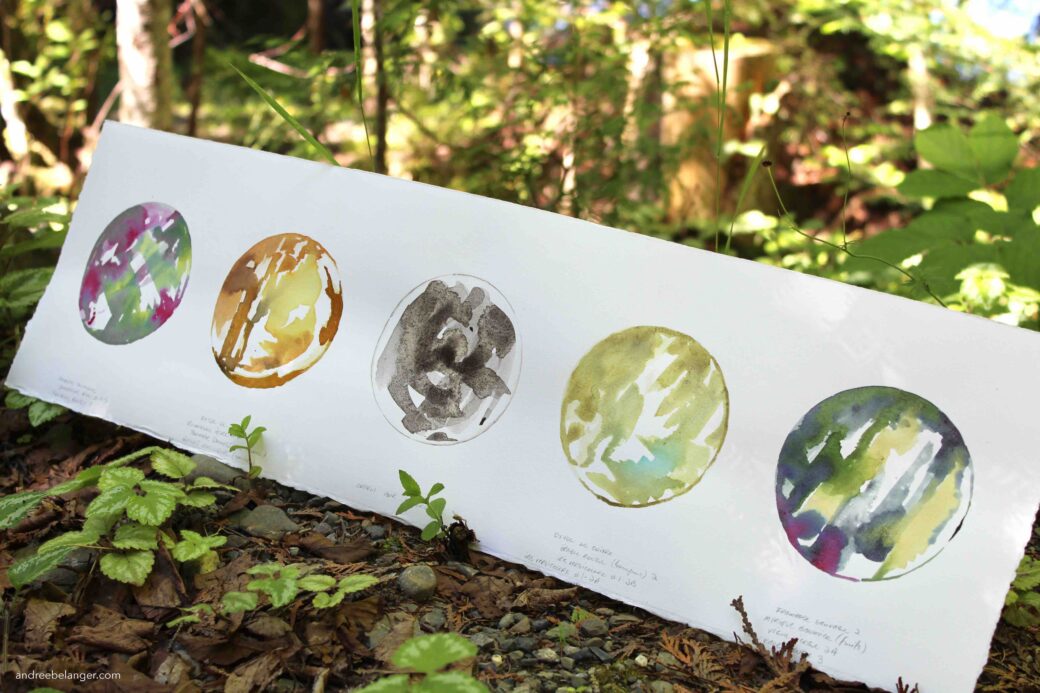 This exhibition is made possible thanks to the financial support of the Conseil des arts et des lettres du Québec (CALQ), as part of the Territorial partnership program with Bas-Saint-Laurent.

Learn to locate, collect and process pigments from vegetals and minerals found in my area, in order to make a variety of inks and create a palette of my territory’s colours. Share the results of this research in region museums, through workshops and an exhibition. 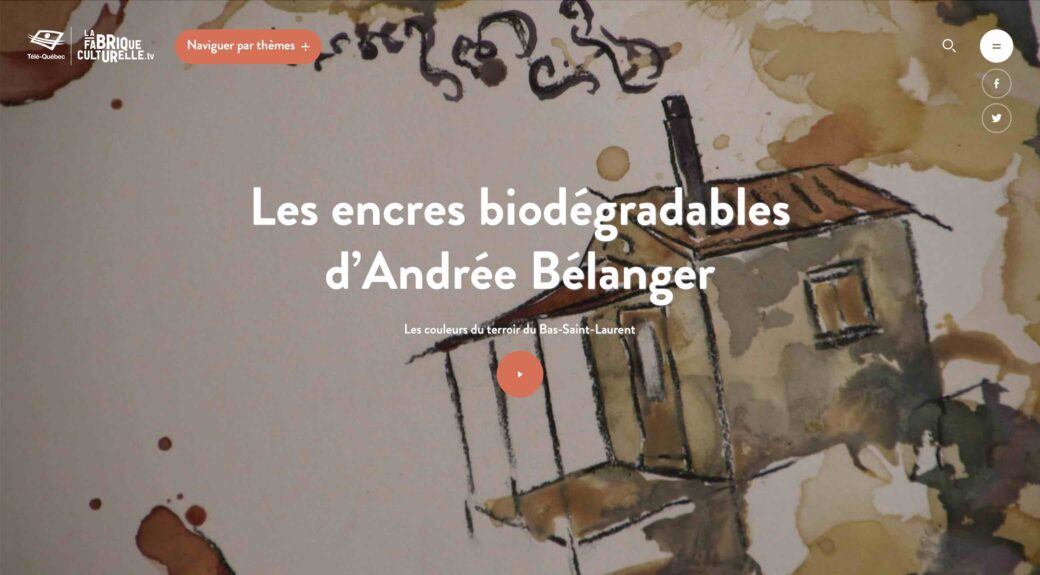 Click to get a view of the workshop presented at Musée régional de Rimouski on June 5th, 2022

RETROSPECTIVE OVERVIEW OF THE PROJECTS  ↓ 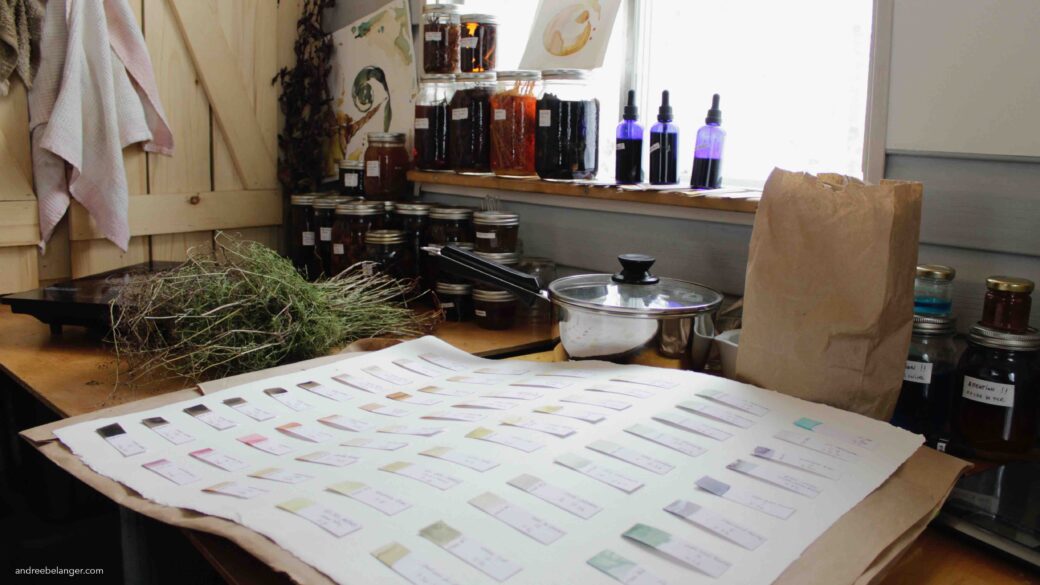 These projects are made possible thanks to the financial support of the Conseil des arts et des lettres du Québec (CALQ), as part of the Exploration and Research program and Territorial partnership (with Bas-Saint-Laurent) program.

The artist wishes to acknowledge the collaboration of Cynthia Tellier Champagne (Studio d’art Shuffle) and Claudine Cousineau as mentors for the first part of the research work.

Us, Our Territories : What Truly Matters is Unlisted 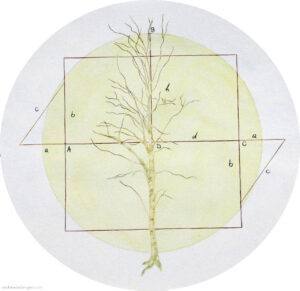 Main body of works shown on the touring exhibition, here

Interactive installation made for the last event, here

Limitlessness and Fragments in Témiscouata 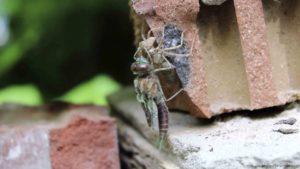 Reality is made of seemingly scattered fragments which take shape through the action of our senses. These fragments combine into a whole for which we make up a meaning, and then we let it dissolve again. The more I define the limits of these fragments and of the whole that I build out of them, the more these limits elude me. The frontier does exist, yet it has no substance : it is a non-frontier, which unifies all of that it divides. Témiscouata, speck of universe, is also composed of an infinity of fragments. Paradoxically, it is its singularity which makes it a part of the world, and which reveals the world. Here, pieces of Témiscouata are used as ways to explore universal realities.

A Division is a Connexion 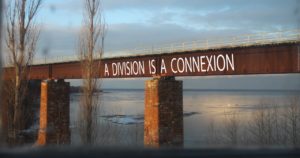 Within the Récif I experienced the fundamental artist residency : space and time.

This freedom led me to discoveries reaching beyond the objective I had set myself, which was to plan out an artistic project around the concept of “A Division is a Connexion“. I came to let inspiration flow more spontaneously, or even playfully, without trying to direct it towards the aims I would want it to serve. I witnessed the benefits of calling for collaboration at the early stages of creation, and I understood that this process of collective reflection is an arwork per se. Last but not least, living and working among the collective I came to realize that, from the very beginning, my approach to art making has been of a committed nature.

Here are a few exemples of the questions asked to the members and friends of the collective, through the mean of large sheets of paper put up in the hostel’s kitchen during the residency, and the main conclusions which came out of these collective considerations :

Is culture an institution?

Culture is the most fundamental, powerful and insidious type of institution.

Does “The Other” exist?

Does the end justify the means?

A mean reaches the right balance when we regard it as an end in itself.

The strength of an union is determined through the strength that it provides for the individuals who make it. 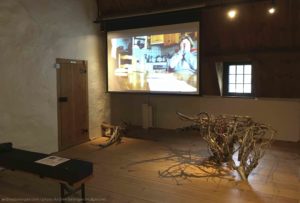 This residency has cushioned my fall back into home country. I wasn’t expecting this. I already knew that the art community was some kind of a professional family to me. I just figured out that from now on I am also a part of the great family of the emigrants. I expected this residency to allow me to learn to work in partnership, to expand my professional network, to concretize an art project. It was the case. However, I never suspected that I would find myself at home among this micro-society of emigrant artists. This experience marks the end, and the beginning, of the journey. I have arrived, yet the world is truly open to me for the very first time. 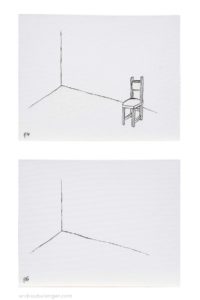 The exhibition “Raw Perspectives” took shape during an exploration initiated last fall with the project “Perspectives on Reality”, which was carried out for the Mmiam (Intercollegiate Minimalist Museum of Modest Arts) in Digne-les-Bains, France. The artist was then inspired by the views of modern physics on the notion of reality. She has now moved on to a more direct examination of the facts : no theories or interpretations, only raw perspectives. The straightness of her style is now advanced to a minimum, in order to show the core of things, through images where the subject contains both the object and the space which allows it to be, where object and space reveal one another. 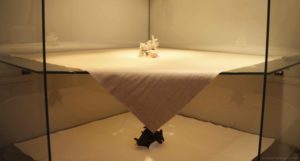 Every single thing in this world is, by nature, impossible to define in human terms. We can certainly describe a particular phenomenon in a variety of ways ; yet even if none of these would be “wrong”, we would still miss on the very reality of this phenomenon because its essence is of motion, and therefore is elusive.

In quantum physics, measuring a size (for example the position of an electron) has a radical impact : the observed object is usually greatly disrupted. Before measure -so by nature- an electron is delocalized ; after measure of its position, it is perfectly localized. This determined position is only one of the delocalized electron’s locations. Since the electron becomes localized as soon as its position is observed, we can never observe it in its -natural- delocalized state ; we can only infer its state from the numerous physical observations which have been made so far.*

Humans have a need to bring reality to a “standstill” -for example through photography- to allow themselves time to observe it, to study it ; however, nothing is ever really still. Therefore, through their very investigation humans alter reality, which essence inevitably escapes them.

So what is reality? It is fundamentally elusive, and can only be grasped by integrating its unfaltering flux. Reality is -literally- to be found “between the lines”. 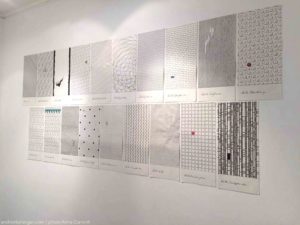 These places where our schemes break end up making their own pattern. A structure so broad and fluid that it could not fit into a readable design. Even though natural and tangible, this framework of human existence remains a mystery to us, as we find ourselves intertwined within it. Its code encloses and transcends us. Cyclical ruptures. No rupture. 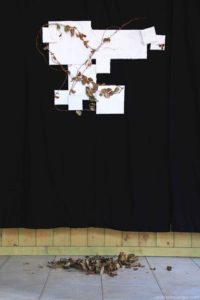 .
It’s been months since the artist has left her country. After quite a bumpy landing, she’s just floating around, mystified. Slowly but surely, the new territory pervades her, and vice versa. Shifting ephemerals and essentials take fuzzy shapes, setting new landmarks on her own inner territory. 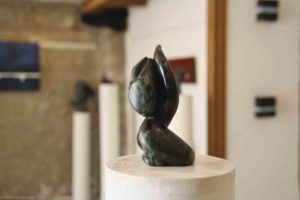 Hard Fullness testifies to the difficulty, or even suffering, inherent in any process of development and any completely honest approach, as well as the resistance and the brute force which are experienced as both the source and the fruit of it. 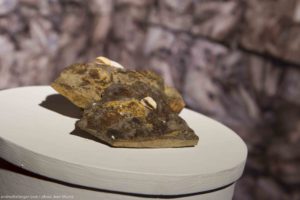 Finding Diadem in the Pit

“We’ve all buried something at some point.”

In order to collect equine bones I would use to build a sculpture, I decided to dig out the mare I owned as a teenager, which had been buried on the family land seventeen years before. Having been told about the project, the archaeologist Nicolas Beaudry offered to collaborate on the exhumation. Slowly but surely, the seemingly simple step of collecting material turned into a project of its own. However, since the carcass had been limewashed when put underground, the bones were not clean enough to be gathered yet. The collective exhumation performance gave birth to a short film, as well as to an exhibition. The show included a screening of the short film, along with a mural photo installation and a 3D installation on plinth. This last piece was made of all I could take from the pit : three pieces of stone and two horse teeth.

“I would have kept the horse, I would have recovered her bones, but there’s nothing but a rotten skeleton.” 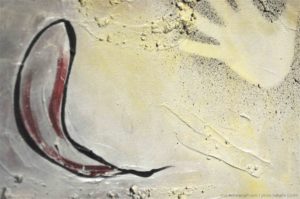 I cannot explain how civilization rooted in prehistoric humankind. However, since I have let the process of creation be pre-eminent and tried not to pre-judge the outcome while working on “Origins”, the end product gives a sense of the collective unconscious. And this might be a key to better understand the way humans conceive of and build civilization. 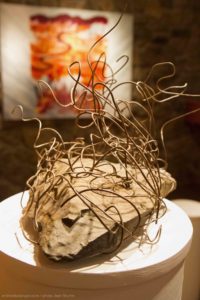 That of which humankind is made is denied when civilization and nature are construed as opposites. Humans have long adapted their environments, rather than adapt to them. Now because of rapid population growth, humans have been forced to come up with societal systems, which, as it turns out, do not adequately meet their needs. Paradoxically then, individuals must now learn to adapt to these artificial constructs. What is amazing is that individuals’ attempts to adapt are usually so seamless that completely artificial situations are accepted as “common sense.” Individuals are no longer in the driver’s seat; Frankenstein’s monster lives. Members of society wallow in reassurance provided by the uniformity of the institutions which feed on their work. The relationship is interdependent and its ties bind.